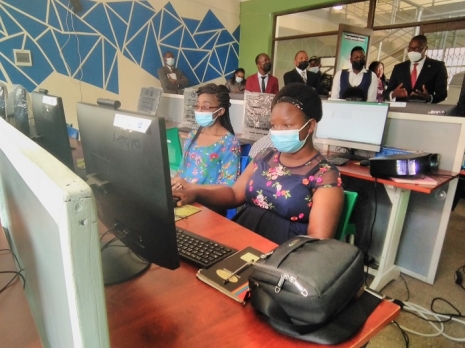 The beneficiary tech hubs are Technolab from Dowa, Dzuka Africa from Blantyre, mHub, Growth Africa and Ntha Foundation and Mzuzu E-hub from Lilongwe and Mzuzu respectively.

In his remarks, Kazako described the launch of the grant as a milestone in attaining economic opportunities in digital space which he said will lead to job creation and economic empowerment among youth.

“The world has now gone digital and these hubs are part of all our energies put together to create jobs. The entrepreneurial skills will allow the young people to start their own companies and employ others.

“The persons who do do Kombeza yoghurt are young people who are a product of these tech hubs. There are so many others of such young people being involved in agriculture, main stream digital creation and some are into media,” said Kazako.

On internet cost, Kazako said government is still negotiating with internet service providers to further reduce the costs a development which he anticipated would be catalyst in smooth implementation of the program.

Kazako, however, warned beneficiary tech hubs to use the money for its intended purpose saying any abuse will be faced by the law.

“Government will not allow abuse or wastage of these resources in any way. I, therefore, advise the beneficiaries of the grant to use the resources for intended purposes and account for any penny utilised from this grant,” he said.

Speaking on behalf of beneficiary tech hubs, Oganive Chingakule, of Growth Africa thanked government for the support saying it will help the tech hubs to reach out to more youth and women in need of digital solutions for economic enhancement.

“In the past it was a struggle to share a vision with government. This is a commendable step by the government,” she said.

He said more activities will be launched under the project which will among others include free public Wi-Fi and internet connectivity in 500 public institutions.

Before the launch, the minister toured Mzuzu e-hub where he interacted with students and appreciated entrepreneurship skills being offered at the institution.