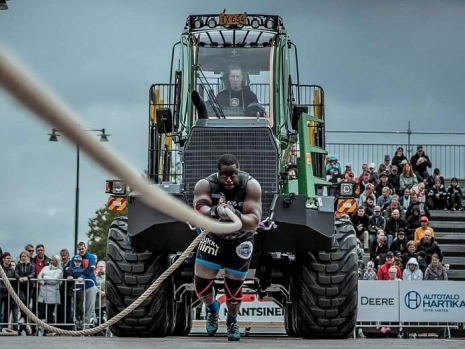 Zake Muluzi- son to Malawi’s former President Bakili- powered his way to victory in the John O’Groats Strongest Man competition, and vowed that he will return next year to defend his title.

The self-styled “Malawian Monster”, who is based in Nairn, lifted the engraved glass trophy and £1000 (about K1.2million) prize for the winner on his debut appearance at the event.

Muluzi (32) edged Orkney’s Calum Elder into second place over seven tests of strengths in front of an enthusiastic crowd on Sunday.

The “end of the road” roundabout near John O’Groats harbour was cordoned off to become a circular arena as the competition returned to the centre of the village for the first time since 2019.

“I’m over the moon,” the powerfully built offshore worker said. “It was a good run-out.

“You never know what will happen but I was confident in my own abilities.

“It was a fun competition and a good turnout as well. It’s a very nice setting and good scenery.

“This is my first time in John O’Groats but I’ll definitely be back next year.”

Muluzi, who was born in Malawi and moved to Scotland at the age of 14, is now setting his sights on the Scotland’s Strongest Man competition next week.

The seven gruelling rounds on Sunday consisted of a keg medley, Farmer’s Walk, squat lift, monster dumbbell press, deadlift, Fingal’s Finger and tyre flip and drag, with four points awarded to the winner of each discipline down to a single point for the fourth-placed contestant.

Muluzi emerged as winner with 23 points, one-and-a-half clear of Elder. Aberdeen’s Rob Crockett was third on 15.5, with Kris Hamilton – the only Caithness competitor – fourth on 10 points.

Hamilton (31), a personal trainer, said: “I turned up knowing that I was going to be on my limit with a lot of the weights, but I thought I’ll have a bash.

“I’m happy to support the event because I think it can be a fantastic spectacle here. You can see how much it has grown from the original one.

“The weather makes a massive difference too.”

He added: “I’m happy with how I did, I’m proud of what I’ve done, and I managed to sneak out of the bottom position on a few events, so thumbs-up and hopefully I can put my feet up tonight.”

The competition was again organised by John O’Groats strongman Kevin Macgregor, with assistance from a number of local helpers including Keith Muir on commentary duties.

Macgregor (29) won the socially distanced 2020 competition which was held away from the main part of the village and was not open to the public. The the reigning champion was unable to compete this year, as the event returned to a public setting, because of an arm injury sustained during training several weeks ago.

“The weather was not too bad and we had a good crowd, so I’m happy.

“It’s good to be back at the harbour. It’s the first thing there has really been for the community this year.

“A big thanks to the helpers and organisers. We were very well supported by our 20 sponsors so we’re very grateful to them.”

Macgregor said he would be hoping to attract more competitors for next year’s event.

He added: “We have a new champion so that means I’ll have to do it next year too.”